A personality application for quick and somewhat correct results
June 27, 2017

I love it when I see something naturally chaotic in a structured, simplified, and quantifiable format. That's why I admire psychology tests as they help me understand the human nature which I find very chaotic. My favorite personality tests are mostly based on theories of Freud and Jung. There's one thing I don't like about those tests, though. They take too much time to complete.

Buzzfeed-like, fun but nonfunctional tests are taken by at least hundreds of thousands of people, every day. I doubt that more scientific ones are that popular. MBTI and similar tests, for example, have almost 100 questions and each question has 5 options. They take a lot of time and today people are looking for things that are easy to consume. There must have been another way to obtain the same results with a participant who is somewhat consistent and self-aware. So, I thought maybe we should find the optimal point between these two opposites and I decided to create a personality test that is working yet easy to complete. Creating a web application could be better, but I was trying to improve my Android development skills when I started this project last year (the app was published in early 2017). 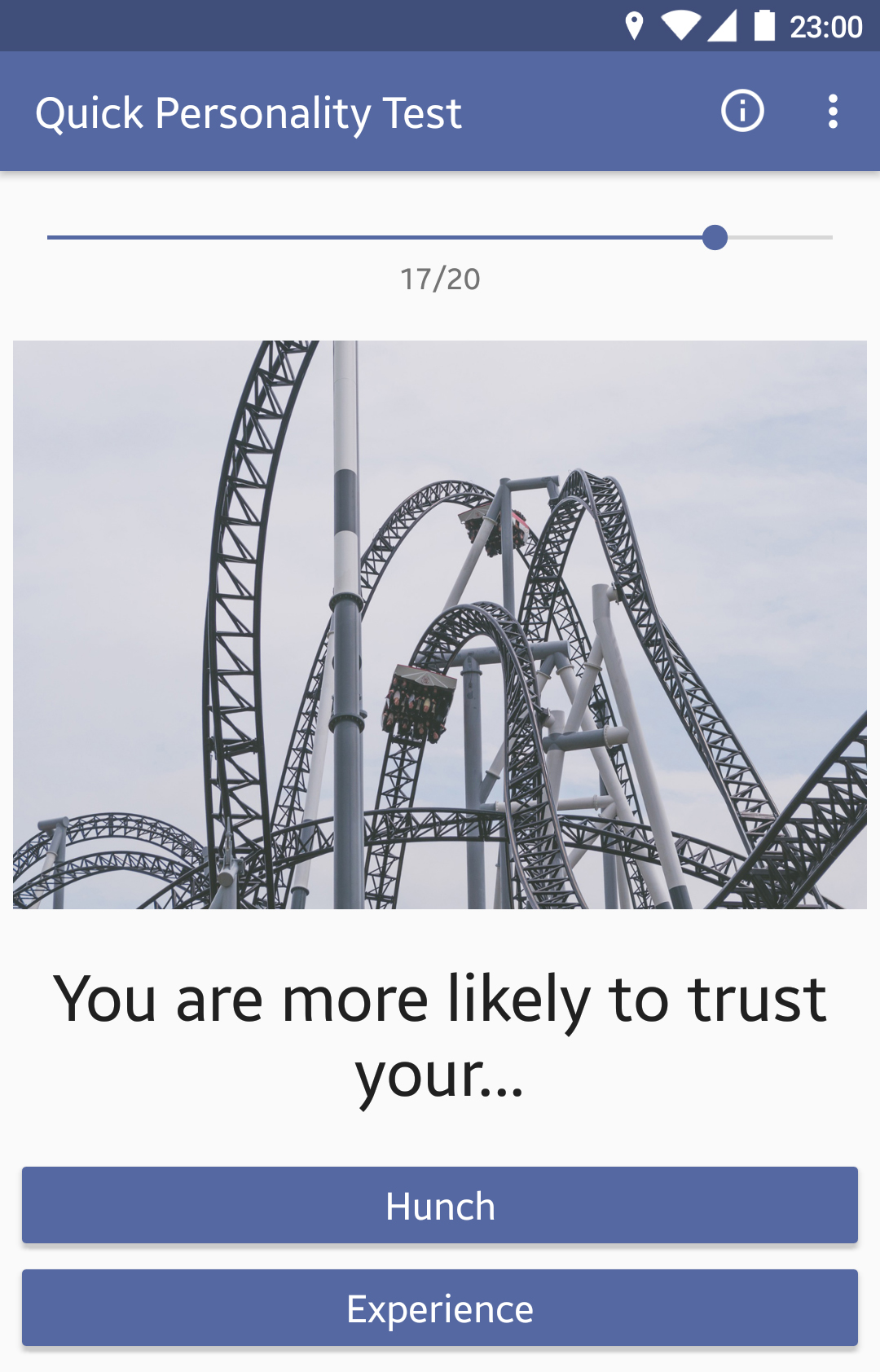 I started with examining those tests to understand what makes them work and how the results are calculated. MBTI, for example, actually consists of only 4 types of questions which evaluate the 4 main factors of personality. It constantly asks the same questions by paraphrasing them a little. I carefully examined all of them and picked 5 questions for each type, which makes 20 questions in total. Since each question is about only one of the factors, it was also possible to simplify them to have only 2 options. The other 3 were just middle points between those two extremes of the continuum. That way, I obtained a simple personality test consisting of 20 questions and 2 options for each. I also added my own interpretation to the questions so that they would still evaluate the same thing but in a different form. Then, I decided to put images for each question, because we all know that we need to put some images to be able to pull people's attention. Without them, the application was so dull. I tried to find images that would be generally related to the question but sometimes I had to use an image that only relates to one of the options. All of the images have a CC0 license and I think I got them all from Pexels.

Does it really work?

I know, from a scientific point, everything I did was horrible. Reducing the number of questions harms the reliability and MBTI is already being criticized by some people about its reliability. Restricting options to only the extremes makes it less precise. Making changes on the questions might be completely against the standardization of the test, which obviously takes a lot of effort. Including images probably affects the users as they point a context and sometimes an answer, although they are warned not to think about them. I was more careful at first, but that way it would be impossible to complete this project. I had to compromise. Because of this, I got some negative feedback from few psychology majors, but I think it really works (at least for a test that takes about a minute to complete). Feel free to try it and give feedback. 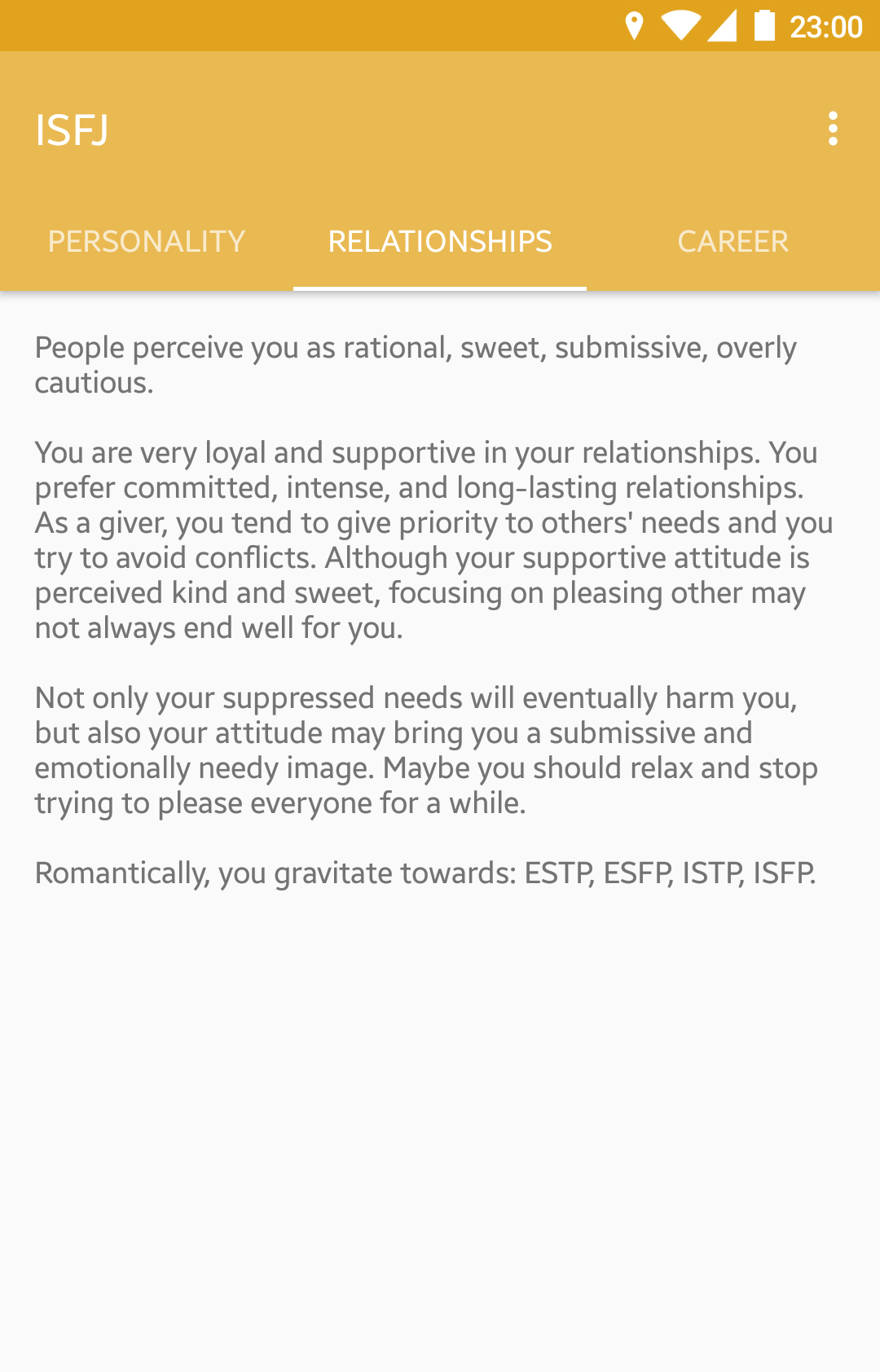 Although the application doesn't have extensive information, I find myself knowledgeable about MBTI types and I was able to give the basics of the personalities. I was mostly interested in a quicker solution to find your personality type. After all, a user can search for their personality and learn more from more reliable sources. Still, I decided to give some extra information which isn't provided by mainstream MBTI websites. I put quick bits of information like reflecting emojis, purpose of life, personal problem, etc. for each personality. It was also possible to draw some parallels between MBTI and other personality tests, so I put corresponding Hogwarts houses and D&D alignments as well. At this point I utilized the information that was present on the Internet, but I made them fit in with my interpretation and I sometimes had to write them from scratch. I've added some suggestions for relationships with other people as well. Each personality excels at something, but sucks at another thing. However, these suggestions might be a bit too blunt and they might provoke the user, I'm not sure. I put the probable romantic couplings, but there is no consensus about the right way to couple personalities. Also, only because a personality may get attracted to another personality doesn't mean it would be an ideal match. Anyway, I explained these key points by referring a bit more technical terms like primary and secondary functions of the personalities. Therefore, it's a mobile app that gives you a summary of your MBTI type and it provides some extra information.

Technically, the project was completed in a very short time. I learned a lot about fragments in Android. I gained a little bit of experience with animations. I tried interstitial ads (triggered once when someone completes the test) for the first time. The content was the bottleneck of this project. Filling the content took a few months since it was not particularly entertaining and I had other things to do. I published the project in early 2017, but the content was in English. Translating the content, which I had translated from Turkish in my mind before writing it, back to Turkish was painful. I wish I wrote it in Turkish before, because there are many things that you cannot directly translate. Also, my writing style definitely changes between languages. I knew the content would take some time, but not this much. This might be the last mobile application I've made, as nowadays I'm mostly busy with developing web applications using LAMP stack. If not, I would like to make a datacentric application next time.

I've just updated the app to correct some typos and to support Turkish. You can find it from here.